Welcome to the Moba-Fans.com, today i will tell you about basics of League Of Legends rating games. If you ever wonder how enemies have such advantage in exp points or gold, then read this article. I hope it will really help you. 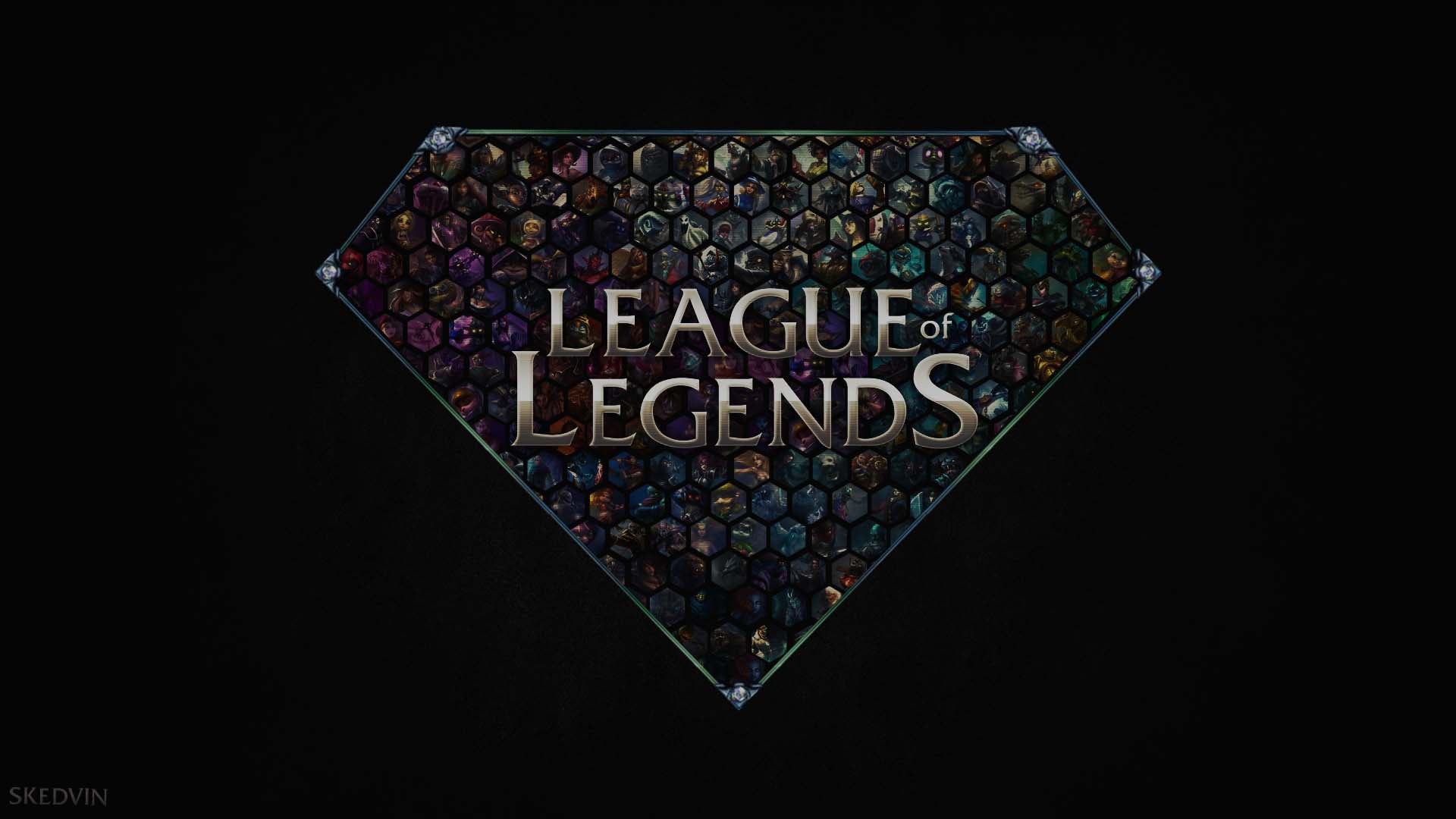 How to boost your Elo Rank

Every second in game, when you do not farm gold or experience, you decrease your winning chances.

Lets inspect mechanic of this game, and understand how continuously farm of exp and gold can increase your chances of victory. We will analyze all that we know about League of Legends mechanics, and what gives a great advantage to your team and brings victory later.

For the most League – is a game, in which you can easily play, but in fact you need a really hard work, day by day, to rise your Elo rank. Perhaps, you already read some guides in the internet, follow professional meta in the game, but for this article i decided to start from very beginning.

Lets learn inner mechanic of this game, and this will help up to increase our winrate in every match. And even more, when you truly understand logic of League of Legends and get a true competition spirit, you can use it in any other game. So let’s over with beginning, and go straight to the numbers.

Minions, or how i started to love gold.

Let’s begin with a simple fact: It is possible to destroy an enemy’s Nexus without killing any champion. 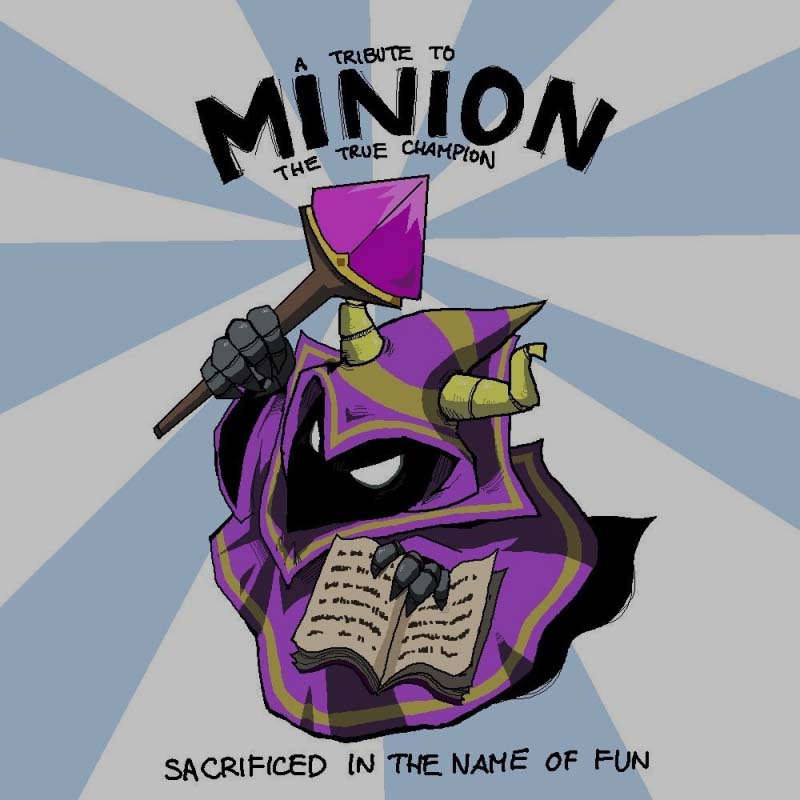 And this is the main reason why most of the players play in “safe mode“. Most of the Pro-Gamers know one simple fact. The best place in the game – near the minions, and optimal task – to earn money from these minions. Exceptions are only additional tasks, as Baron or Elemental Dragon. So what logic hidden behind all of this?

This table will help to understand the reward, that you can earn for the laning stage, of just for one lashit (hit when you kill minion / champion and you receive gold from it) up to 20 minute of the game. Typical match in League of Legends at 20 minutes point goes from Early game to the stage of the Mid game. And accomplishment of additional tasks (like baron and elemental dragon) goes in the front plan.

Researches show that at lining stage you should priority melee minions instead of casters, because this way you will get more gold. Despite the fact that these 2 kinds of minions are upgraded with the same speed, melee minions will bring you 22 gold, while caster – 18 gold. Siege minions will give even more gold – 27, and more – gold for each siege minion upgraded with each cycle – 1 gold per cycle. 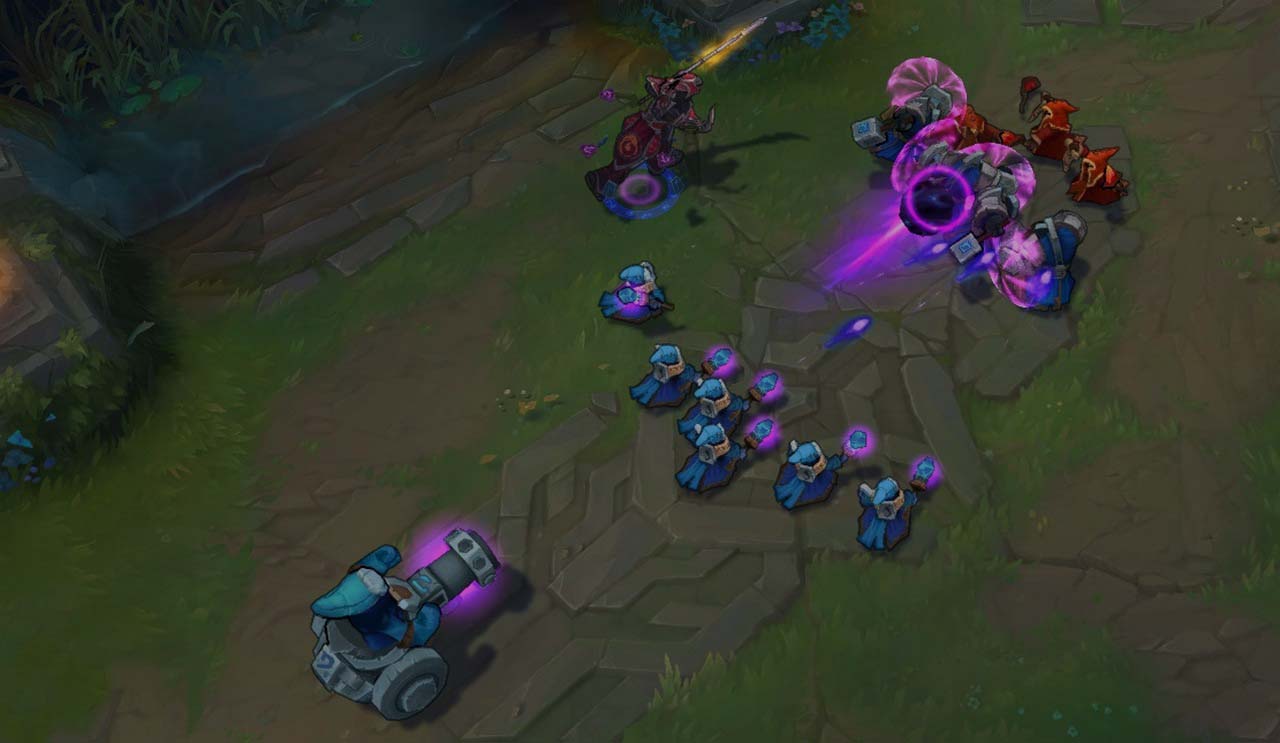 Player with ideal CS (creep score – number of killed minions) earn almost 5000 gold by 20 minute. And it is a really big bag of money, for example you can buy a Trinity Force and some mid-game artifact. And the exp you will earn at this way will be enough to achive 15 level (14000 of exp point for solo line). Duo lining will decrease number of exp point to 55% and bring only 7500 of exp that equivalents to 11 level.

This is reward for a sitting on line and killing minions. And now let’s look on other ways of gold and experience earning.

Frags, or what gankers hiding.

When i learning system of “Kills” and “Assists”, that used in League of Legends, i understand that champion that make elimination (kill an enemy champion) will be rewarded with 300 gold.

If champion killed, then reward for him decreased by 9% after 1st death and for 21% for each new death, with the lowers plank – 52 gold.

As soon as champion with a death streak perform a kill, reward for his head will go back to 300 gold.

And that system works in back way. The more you kill, the more will be reward for your head. With each sucsessful kill reward for your elimination will be increased by 10%, until it reach 500 gold.

So i create a little table:

But do not forget that player who did kill get a full reward, while other possible assistants share additional reward that is 58.33% of elimination reward. If a victim has a killing spree than assistants share 70% of bonus gold reward.

A little example for those who do not understand:

Le Blanc stay in middle against Cassiopeia. Le Blanc have a killing spree and reward for her head is 500 gold, then Cassiopeia call Rammus to help her. Together they kill Le Blanc, and Cassiopeia done a lasthit and get a full reward – 500 gold, while Ramus get an assist and 58.33% of standart reward (300 gold) = 175 gold, plus 70% from bonus gold (200 gold) = 140 gold, then in sum Rammus was rewarded with 315 gold.

And now, i hope, you will understand how importants are assists are for team.

Another example for a more deeply understanding:

From blue team at bottom line stay Tristana and Sona, and their opponents from a purple team – Sivir and Taric. Until 3rd minute nothing happens, a then Taric go out the lane to place wards. Tristana and Sona immediately attacks Sivir, but Sivir have a perfect micro, and she done firstblood (first kill in game) on Sona for 300 gold (this is a rewarf for firstblood).

You may say that Sivir was rewarded with a bigger bag of gold then Tristana, but do not forget that Sivir is dead. Tristana is alive and probably with almost full hp, because Sivir focused on Sona. And due to this, Tristana can do 2 important things: Firstly, she can farm minions for 1 minute, and if she could do most lasthits she will be rewarded with 140 gold and 300 exp points. Secondly,  she can push the line to the enemy’s tower (usually minions fight somewhere between towers, but you can push one of the lines to attack enemy’s tower). And if you done it well, then opposite tower will kill all blue minions, while Sivir is dead or run back on the line, and this little trick will deprive her from farm.

Even on the early stage of the game this is a huge gap between commands. Now purple team must play more safely, just because they make mistake in the beginning of this game.

During the game reward for minions is increasing, as a penalty for death aswell, so you do not want to die randomly, because you will lose a good chunk of gold and experience.

Well, enemies elimination, despite the high risk, bring great reward, but the cost of a failure is also very high.

League of Legends – game where brain wins, not the fingers. That mean that safe game play, focused on secured farm and objective completion is highly recommended for a rating games. By this way you increase your power almost without risk.

This is just a tip of an iceberg, and more than 90% of information that you need to win most of your rating games is lies below so stay with us for more guides like this. If you step on this road then you must know that this is a hard way, but reward is totally worth it. But if you did not have time for all of these, there is a easier way. And i will tell you about it.

Boosteria – one of the best boosting companies

As you can see, to solo boost your account you need to know a huge amount of information, time to practice, and then play at your best. Not every man have enough resources to boost his account to the desirable League. And right for those peoples Boosting companies offer their services. And here i would like to tell you about the most popular and legit company – Boosteria.

Boosteria always investing efforts and resources in their project, and with this steps they climb up to the top of the Elo Boosting market. Every booster that works here has his own profile, where customers can add comments about him. You can speak with your booster any time through a special chat window (it will be available right after the order) in your personal area. You also can check progress of your order here, and talk with a support center.

And the most tasty part of all this – Discounts. Yep, Boosteria provides discounts that dedicated to all major event in League of Legends world. Right now they have a 10% christmas sale on all their boost services.

Do not even worry about that your account will be blocked. Of course it is possible, and in this case Boosteria will provide a full moneyback to you. But the chance is incredibly small, because booster did not speak with anyone, play by rules and never whines about bad team mates. Tribunal will never even look at your account that is driven by employers of Boosteria. 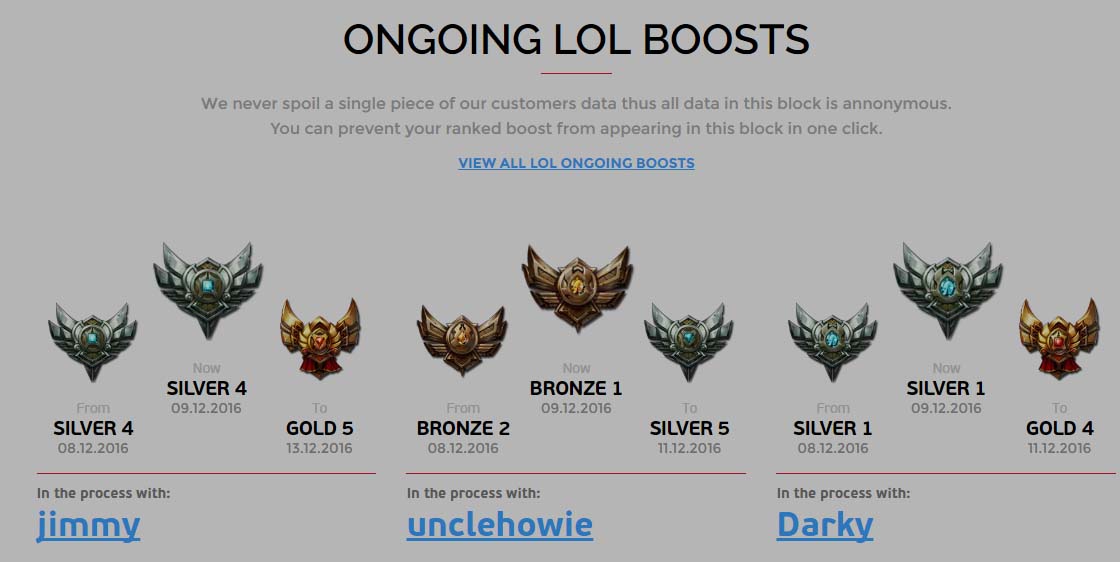 If you have a good amount of Influence Points and Riot Points, then do not afraid that you may lose some of them. It is restricted to spend those pointes without client permission. So before buying some things on IP or RP your booster will always ask for permission in the chat in your Personal Area.

And what about runes and masteries? Of course boosters will change them to increase their chances of winning, so if you have some unique build just save it somewhere. Re-building did not cost anything so you can recreate your buildes right after boosting. 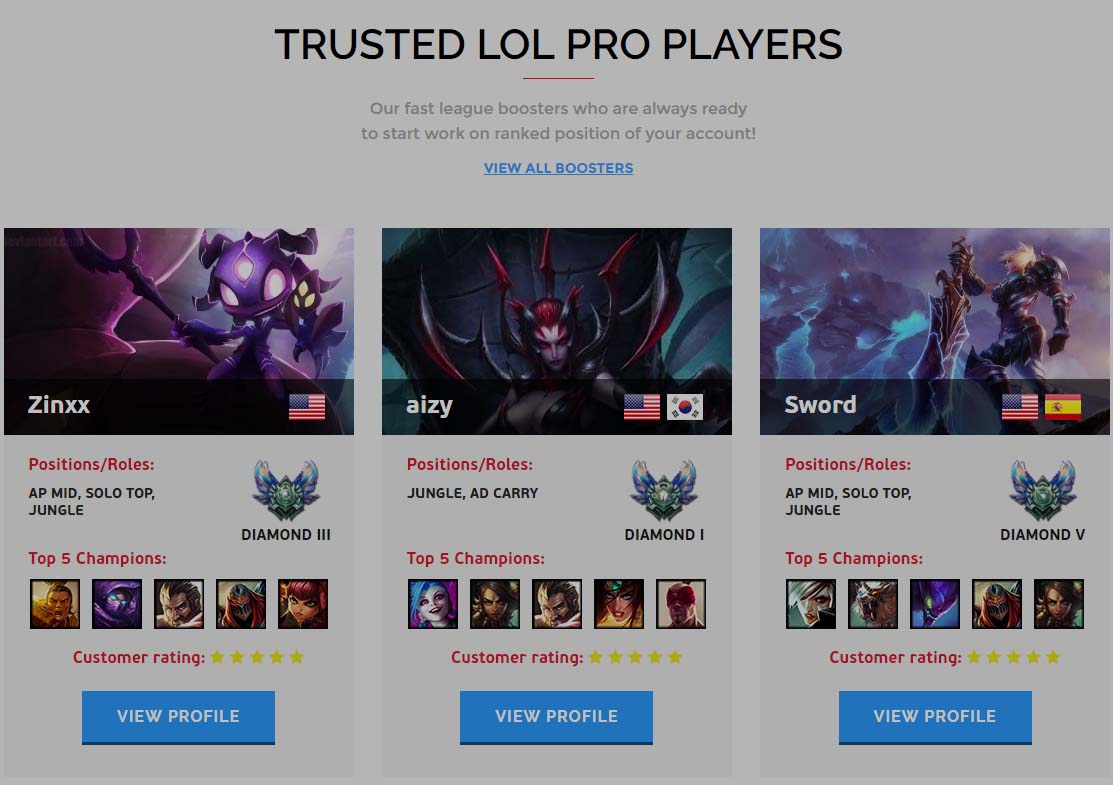 Soon Preseason 2016 will end and you may be needed help of this boosting company in your placement matches. Just go to the League of Legends Boosting service and place an order. After those placement matches you will be rewarded with a really high rank!

If you ever wonder why peoples are order boost on their accounts, then i hope that i tell you about all those advantages of Elo boosting service. Some people just want to relax, playing a 1 or 2 games in the evening in a good company of polite players, and for them high elo ranks are unreachable due to the lack of time. They just can not play for 3-4 hours every day, performing their best and reading all these manuals about League of Legends, so they just go to the League of Legends boosting service like Boosteria and place an order. So if you one of this kind of people, then you know where to go.

Stay with us for some more interesting articles about Moba games.

Check my other news about various Moba games: