So it’s time to add a new character into one of the most popular games in the world.

Kled and Skarl ready to come to League of Legends. Riot Games has just introduced its new champion.

Kled – yordl trooper and Skarl his faithful companion.
Kled participated in all the campaigns of Noxus, he has earned all military ranks and never backed down. The veracity of these stories, however, is questionable. Kled fly into the thick of the battle and with all the fury protecting all what is his… or takes up all that he can.

Get acquainted with the new character you can on the official website.

Once again, Riot changed set of free champions, this time we will have to wait for such characters as: 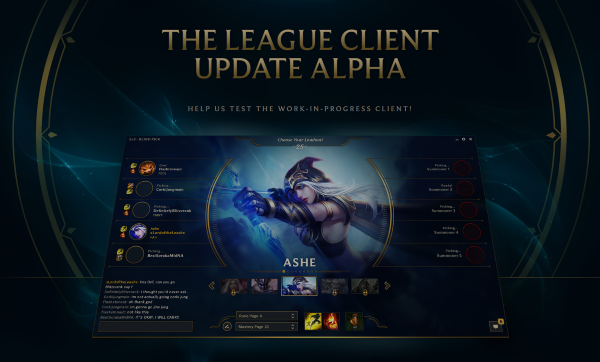 Riot Games has officially unveiled a completely redesigned client MOBA game League of Legends, and also opened up the possibility to register on its alpha testing.

As said by the developers, they have never opened access to such things at a very early stage of creation, but it’s time to seek help from the community. The new client will allow an easier way to play with your friends, give a new look, and updates the Basic technologies that make all the menus will become more reliable and convenient. Creators say that they want to make a bright client .

Note that the client alpha version lacks many features and add them is in plan for testing, but all the testers will have access to the old client (and all its possibilities).

Apply for alpha testing on this page and if the request is approved – you will receive a response to the mail and the notification in the game.

One thought on “Weekly League of Legends News #1”