On the eve of the main part of The International developers released another minor update that contains several changes related to TI.

Only eight characters were not selected or banned in The Internationale 2016.

With the exception of the Arc Warden, which is banned in Captain Mode, during the group stage were selected and already banned 102 hero. Let’s look at those left out in the cold:

However, another character has been banned once, but never taken. His name Necrophos .

This list would be greater if the team would not have tried to implement some of the other characters. What came of it we’ll see below
Natus Vincere could not realize Omniknight against OG, Sniper has not helped Vici Gaming Reborn against the mighty men of
EHOME, Newbee lost with his Gyrocopter to Koreans from MVP Phoenix, but Nao still beat Team Secret with Spectre.

Gyrocopter, Leshrac and Lina were the most popular characters on The International in 2015, and now they are on the bottom of the sea – Gyro was taken in this tournament just once and failed. Pdd could well afford to choose Treant Protector, S4 perfectly plays as Leshrac, and EGM famous with Jakiro. With the rest of the characters is not so smooth, but their appearance is quite possible.
From heroes, taken at least 10 times, Ursa, Assassin Nyx and Elder Titan – the owners of the biggest win rate – 80, 78 and 73 percent respectively.
Well, now for those who are at The International 2016 is loved and appreciated.

Here is the best characters in terms of KDA and GPM: 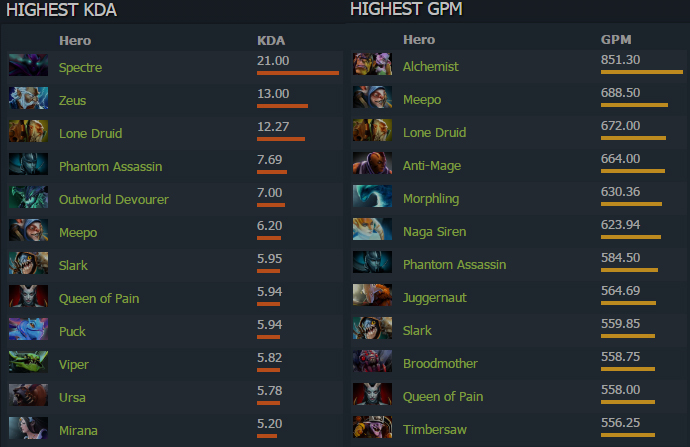